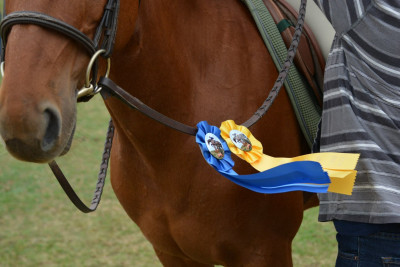 Lease only- negotiable/$900/month. She has won champion in walk only with 6 year olds, reserve champion in ponies at her last small show with a 13 year old. Champion in jumpers a lot with a 16 year old, reserve champion with the 13 year old. She's done a few dressage shows. She's done a lot of pony club rallies and meetings. And cross country schooling. She's also pulled a cart and we have done vaulting off of her and she's run some barrel races. Right now she's in a lesson program, we keep her work load light but she does 4' courses with good riders and x rails with beginners. She's very forgiving but will point out what the rider is doing wrong. She very rarely refuses (unless something is wrong). My little kids tack her and lead her to the arena by them selves. She's very sweet but does have some attitude. She won 4th last year overall in GHHJA in both pony Hunter's and pony medals and that was her first show year. Her flying changes are sticky but if you ask before the jump she'll change over them. She's currently in Sugar Land TX. Please contact me if interested. NOT FOR SALE, LEASE ONLY.